Home » Every day » You know you are in trouble when…

You know you are in trouble when…

We all know that when construction folks say “It is a 5 days job” it is likely to be more. It is practically a universal phenomenon that unexpected developments occur in any major project.

In India, you can reliably double the time so I wasn’t surprised when “5 days” work in our bedroom stretched to two weeks. What was amusing to discover was the different definition of “done.” According to the contractor, “finished” looks like this… 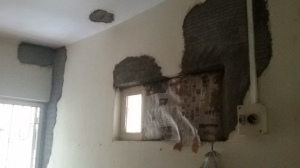 Finally got my bedroom back!

In our case, “5 days” actually meant more than a month – with a little wrangling along the way to determine who was responsible for plastering the walls – before a painter came to actually “finish” the job.

So you can imagine when they announced would start to demolish… erhm… I mean repair our kitchen and living room last month, I knew said “not yet.” Especially as their estimate this time was “15 days” work, which would equal “1 month plus!”

As the breaking phase of the ceiling, support beams and most walls in the main living area will be an unmitigated nightmare, we decided to move as much as possible from there to our bedrooms under lock n key. Our humble request was to begin the banging demolition frenzy while we are in Canada – blissfully absent from the bashing, noisy work. We know we will still return to a mess, however our hope is to avoid the worst.

Today, the contractor agreed to our plan.

We know we are not alone in this misery – all the flats in our building are affected – and if you mention such an experience to others, many will pipe up with similar tales. After all, it is better to have these repairing initiatives before these older buildings collapse around their residents!

It is almost laughable to think how naïve the first building notice was – confidently stated work would start in February and take no more than three months – well before the monsoon.

We knew we were in trouble in May… there was no signs of finishing and the temporary structure for the workers was fortified with metal sides and a roof with tarps – a sure sign work would carry into the rainy season. 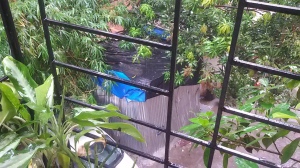 We are now five months into the project and by all accounts there are many more months to come.

So… when someone says in Mumbai “It will only be a couple of months”… don’t just double the time, triple or quadruple it!

By Carissa Hickling in Every day, Work on June 18, 2015.
← “We don’t want your money!” Indian mutual fund cos deny Canadians because of the Americans So long, farewell! →