One of the best things about my recent trips through Singapore was meeting up with friends. And the food. How fab is it when they combine?

An old University of Manitoba friend invited me to meet him and his wife at this lovely little cafe The Muffinry on Telok Ayer. Little did I know til I reached, that this charming place is actually theirs! END_OF_DOCUMENT_TOKEN_TO_BE_REPLACED

Losing the right to vote?

While not always the case, for many of us that chose to embrace the world unfettered by the borders of our birth… we give up a few things along the way… like the right to vote.

Many Manitoba provincial and Canadian federal elections ago I lost the right to exercise my democratic ‘right.’ And while I may have lived a decade + in India, that alone would never bestow any rights to participate in elections here.

Yet if I COULD vote who WOULD I vote for?? END_OF_DOCUMENT_TOKEN_TO_BE_REPLACED

They are quixotic, winsome, wryly witty, multilingual (English, French, Portuguese, German…)… when I listen to their music, can’t help but break out into a giant smile! END_OF_DOCUMENT_TOKEN_TO_BE_REPLACED

In this week’s feature, film that takes ‘centre stage’ and lead to discovering some catchy music. Think I better add another category to my list of ways to discover new music! 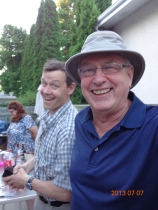 Ivan (left) with my uncle (right) – both big whisky fans!

Ivan is a guy who loves mountain climbing, film making and a good whisky. When his wife Angela got a job back in her hometown of Winnipeg a few years ago, they packed up the kids and critters, sold their gorgeous home in Squamish and settled down in the ‘Peg.

It was no surprise that he got involved with the Winnipeg Film Group and joined a private whisky tasting club – The Cabinet. (Hey Ivan – Am I STILL the only woman to enter the hallowed tasting den?)

As for the mountain climbing and adventurous spirit? The Canadian prairies are a loooong way from any serious rock climbing. However don’t let that fool you! Just check out their company Fringe Filmworks – pretty clear there are creative ways to let an adventuresome spirit loose on the world even if the base is Winnipeg!

For Coffee, Ivan did the direction and camera work…

Egads!? It’s been three whole months since I began this blog! Inspired by Zhonggou Jumble, I decided to introduce a summary covering a few highlights (and likely some lowlights too) for each quarter.

“And in the beginning…” I was encouraged my many friends in many places to share every day stories and observations about life in India, work in Asia, and reflect on a variety of experiences from the mundane to the remarkable. This blog is the result.

What I hadn’t expected, yet is hugely enriching, is virtually ‘meeting’ an amazing community of bloggers. Your stories inspire me further, make me laugh, sigh and I especially love it when contemplating a particular topic… up pops a blog about that very thing by another blogger with his or her own distinct perspective and interesting insights.

END_OF_DOCUMENT_TOKEN_TO_BE_REPLACED

“Mauving to Manitoba” from Mumbai Monsoon

We returned to a decidedly wet Mumbai still very much in the midst of monsoon. In an amusing moment, just days after leaving Winnipeg, I was reminded of Manitoba at the most unlikely of places – a Mumbai spa!

While I enjoy little indulgences and luxuries, I rarely prioritize such activities. Most days, basic grooming suffices with self-trimmed nails, no polish, skin and hair that gets the most rudimentary daily cleansing and moisturizer. I’m not fussy about getting ready and can go from a slovenly state to shower, make-up, clothes and out the door in 20 mins or less if required!

A dear friend of 20 years, by contrast, delights in pampering and makes a point in her annual visits to Mumbai to fit in spa treatments.  We normally have a month or so together each year, so it is a ritual that at least one mani / pedi / hair spa visit is made augmented by calling a masseuse home a couple of times.

END_OF_DOCUMENT_TOKEN_TO_BE_REPLACED

Balcony view of monsoon in Mumbai

The monsoon has reached Mumbai and even after so many years here, the first rains bring a special joy! There is something about the monsoon. It is the difference between the economy flourishing or failing. It is the delight of dancing in the warm rain. Children playing, laughing with abandon, splashing about soaking wet. There is a different light in the sky, a different scent in the air, the feel of life pulsing strong, plants and trees take on a lush rich green hue, bursting with renewal.