A terrible horrible thing happened in Orlando this summer. That 50 people lost their lives and many others were injured in a shooting at a gay nightclub is beyond a tragedy. However the outrage and condemnation of the attack was a small sliver of shinning light in a very dark moment.

As I walked through the heart of Toronto’s financial district in June, everywhere were signs of support for pride month. The aftermath of Orlando brought an enhanced push to the usual preparations for pride. END_OF_DOCUMENT_TOKEN_TO_BE_REPLACED

Not sure if you’ve noticed but I’ve been a bit pre-occupied the last while.

Lots happening behind the curtain with the upshot that in just a few hours I will be on a plane from Mumbai to London… enjoy the weekend there catching up with my partner, seeing him perform, hopefully meet a few friends!

Partner and I last year at BAFTA

Then hop on another plane to Toronto. Hope and pray everything goes smoothly with my Indian visa submission.

Hop on another plane to Winnipeg to spend some much needed time with family and friends.

Then hop on yet another plane back to Toronto where my sincere wish is that a lovely new visa will be ready and waiting for me. Pretty please!

And then, yes you got it… hop on another plane back to London then home to Mumbai.

Won’t bore you with the details but this is a big change for me. Til now I’ve been terribly spoilt in the visa department. With a flourish of a pen all that changed. So now… my fate is in the hands of some random stranger. Just as it is for many people. Wish me well!!

The Sounds of Silence… London, Vancouver, Winnipeg, Toronto vs Mumbai

Asia can be a sensory cacophony… Mumbai means living with an everyday decibel level that you just come to accept. Even the background sounds that fade from consciousness are ever present – crows, pigeons, hawkers, traffic, construction, music or TVs blaring, animated conversations at all hours…  there is always something day or night.

Average noise levels of our city are at least triple that of your normal North American city. Throw in a festival or two and you can see decibel levels of 140 and above (let’s just say that far worse than jumbo jets taking off!)

If in doubt, check out some of the articles in AcuosticBlok on the Rising Noise Pollution in Mumbai. END_OF_DOCUMENT_TOKEN_TO_BE_REPLACED

As we prepared our home for the demolition gang, completed last-minute shopping, we struggled with the internet… Yes… living in Mumbai you cannot rely on having one internet alone!

Because ultimately the monsoon is the real culprit in this equation. And the poor drainage conditions in this city that leads to regular flooding, damaging cable connections and more.

I’m not sure how often I will post over the coming weeks while we trot around the globe to London, Vancouver, Winnipeg, Toronto and back to London… so quick before I lose this precious connection… ciao for now and catch you in a bit!

Looking to London, then Van-Groovy… then Winterpeg… T.O. and back to Big Ben!

There is something just so joyful about hitting the ‘confirm’ button when purchasing long haul flights. That extra thrill that tells you… soon… soon… you will be back to the international airport, whip out that passport and wing your way around the globe to a place where your morning is night and your sleep time is a sunny day!

Yup! We just booked our Canada flights… and decided to jazz things up a little this time with multiple stops. Just because we can. 🙂

“Your flight is cancelled”

It was not a promising beginning…. “I’m so sorry but your flight from Winnipeg to Toronto is cancelled.” Stunned, we explained we had onward flights to Brussels then Bombay so we really HAD to reach Toronto.

En route to the airport, we had just been discussing how in Canada planes now never fly empty. Why? If there aren’t enough passengers to make it somewhat viable, the flight is cancelled.

Ottawa Off & On (photo: Carissa Hickling)

The good thing was the woman helping us immediately grasped our quandary and overcame all sorts of impediments to get us on the next flight to Ottawa connecting immediately to Toronto in time to change terminals and catch our international flight – provided NOTHING was delayed.

END_OF_DOCUMENT_TOKEN_TO_BE_REPLACED

My secret to avoiding conking out in the middle of the afternoon with ‘jet lag’ is keeping busy. We did brilliantly adjusting to the time difference between India and Canada until our first truly relaxing afternoon.

While I should have tackled sorting through 60 odd boxes of books, papers and various other items stored at my parents, the lure of a comfortable bed when we planned to camp for the next five days was just too enticing…

About to sink into blissful oblivion, we were startled by the most god awful screeching noise. Something howled and whined its way into the upstairs bedroom at a defeaning volume!

Gotta admit, a wood chipper as ‘jet lag’ cure was a first for me. What keeps you awake when you are dying to snoooooozzzee??

END_OF_DOCUMENT_TOKEN_TO_BE_REPLACED 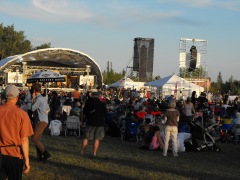 Coming from Manitoba, one summer highlight is the Winnipeg Folk Festival. Held in Birds Hill Provincial Park, it is a remarkable community affair. Just imagine Woodstock superbly run for decades! I have terrific childhood memories of dancing to merry tunes, magical musical moments and mischief with friends as a teenager/young adult, and best of all – the joy of contributing as a volunteer – not only during the festival but as a year-round labour of love coordinating the site security (now safety) crew aka “Fun Managers”.

July 2013 is the 40th Anniversary. It is now a five night, four-day affair, exceptionally organized, harnessing the energies of thousands of dedicated volunteers. While the programming has evolved over the years under various artistic directors – the core of folk, local and global music remains. There is always something to discover…