Part of my recent blogging ‘disappearing act’ is because I made my Mumbai acting ‘debut’!

Most would know that stage and film is my partner’s profession. 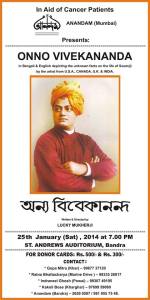 Few would know that there was a time when I flirted with this too. Waaaay back 30 years ago, along with regular school, I also attended Prairie Theatre Exchange‘s theatre school. Acted in a couple plays, did a TV commercial, taught drama education as a summer job and even landed a Drama Award.

No I wasn’t a drama queen – just enjoyed stage work. You could say I came by it naturally as I grew up  hanging out backstage as my mother donned costumes and make-up to go under the bright lights to sing her operatic heart out at the concert hall.

However I left that all behind decades ago until a friend persuaded me to help out a local Bengali community theatre group with a play on Swami Vivekananda. An amateur production with a director who has spent 20+ years writing & putting on plays raising charitable funds for both a cancer patients and girls education – worthy causes indeed! END_OF_DOCUMENT_TOKEN_TO_BE_REPLACED

As shared, I’m rather late to WordPress’s “Zero to hero: 30 Days to a Better Blog” so attempting to fast-track my way through select steps. This is a compressed version of the 2nd week… For the 1st week, check here.

END_OF_DOCUMENT_TOKEN_TO_BE_REPLACED

What a remarkable experience! Over 1,000 people came… first came the friends and supporters of the film maker then as dusk fell, quietly at first a few then hundreds from the nearby slum quietly filled the back, side until every scrap of space was fully occupied. For nearly three hours, the audience was transfixed by the powerful thought-provoking film with its tough insights into our society, politics and people. 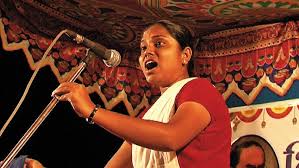 At one point, the power cut and I’m sure more than one person feared the viewing was being halted by ‘the authorities’… so strong the message. A few minutes later, everything was back on track. When it was over, most silently moved on yet were clearly moved. A few older women from the slum came up to Anand and tried to touch his feet in reverence for sharing their story. He would have none of such obeisance and instead a lively discussion ensued until 10pm.

It is heartening to think this film could have such a special public showing – Fountainhead donated the screen, the sound system provided by another company for a nominal fee and the committee responsible for the venue charged no fee and several members came, sharing their support for more such events. Yet the cultural activist Kabir Kala Manch members remain in prison on suspicion (no proof) of being naxalites while the police responsible for the atrocity at Ramabai remain free…

Part of tasting notes from a monthly private whisky club in Mumbai, India. Our January 2014 session was cancelled, so pulled out brief notes from an earlier 2013 session – missed taking photos so have borrowed with credit to the source.

Following our standard format, we blind tasted samples before revealing the whisky. This month featured: Singleton, GlenDronach, All Malt and the Belgian Owl. END_OF_DOCUMENT_TOKEN_TO_BE_REPLACED

What is your most memorable multi-lingual story?

My most memorable multilingual experience was in Calgary, Alberta, Canada in the early 1990s. I was there for an academic conference, staying with relatives and catching a bus to the campus each day…

On one bus trip, the driver had a wide smile, jovial manner and a comment or two or three for just about everyone getting on and off the bus… in different languages! By the time it he was on to the 5th language… I simply had to ask his story. END_OF_DOCUMENT_TOKEN_TO_BE_REPLACED

I quietly slipped into Bangalore for a couple of days… where the topic of “foreigner registration” in India came up.

When you move, updating your address is a necessary bother anywhere in the world. But in India, it can be an incredibly painful process. I changed apartments nearly two years ago and it took only three months to get my bank to update it, another two months for my mobile service provider… however in a baffling twist, I became “Mr Hickling” in the process?!

To “fix” that, one needs a form, an indemnification letter requesting changing gender on 1 Rupee legal stamp paper, passport sized photos, original proof of gender with certified copies and apply in person to present the evidence. I guess the fact that I’m unmistakably female, haven’t undergone a sex change operation and someone somewhere incorrectly selected “Mr” instead of “Ms” in their system is entirely irrelevant?! END_OF_DOCUMENT_TOKEN_TO_BE_REPLACED

Zero to Hero Week 1: Behind the scenes (blog style)

I’m a late to WordPress’s “Zero to hero: 30 Days to a Better Blog” however decided to fast-track my way through select steps. Here’s a compressed version of the 1st week… 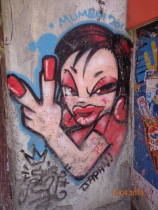 Day 2: What’s in your name – I started just with “Every Day Adventures in Asia” and added the (Mostly) as I expected would share travels to Canada and places beyond Asia too. The tagline “Stories of a Canadian living in India, traveling around Asia” came many months later as my way of making just a teensy bit clearer who I am and what this blog is about.

Day 3: What’s on your mind – Honestly, when “Every Day Adventures in Asia (Mostly)“ began, I didn’t have a full-time job and hadn’t quite taken going ‘independent’ seriously yet… I’m a self-confessed workaholic so having extra time on my hands was a dangerous scary thing.

And while it was great taking a ‘holiday’ and I readily found interesting pursuits, there were limits. I still needed to DO something, ANYTHING to not get completely rusty with working towards deadlines. As I always enjoyed writing, used to share all sorts of stories of my travels, every day life with individual friends and family, thought “Why not start a blog?” END_OF_DOCUMENT_TOKEN_TO_BE_REPLACED

I’m a closet crazy cat lady! However sooooo cannot keep pets with travels… so indulge my desire for critters by visiting the friendly neighbourhood cats in the “village” just outside my building.

As I’m a generous sort, am sharing some random pics of potted cats… 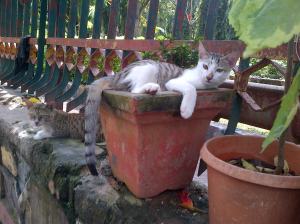 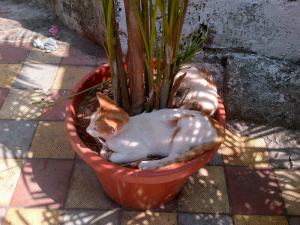 Anyone want a potted plant with cats??

I love this crazy maddening country India that I live in… however, as a  ‘firangi’ (foreigner), I cannot vote and therefore, have no say.

Often this makes me feel mute – not having the right to voice my opinions and frustration at certain situations. Or more positively, am restricted against playing a direct role in being part of any kind of political change. Fair enough, I chose to retain the citizenship of my birth – Canada, so this is the result.

This morning, my partner forwarded a marvellous film short that speaks to this. “Mute” is by a new company based literally around the corner for us called Handloom Picture Company. And while it directly talks of our circumstances in Mumbai, there is a universality to many elements in the message – it is worth checking out. END_OF_DOCUMENT_TOKEN_TO_BE_REPLACED