Anyone remember the ‘taste challenges’ of Pepsi vs Coke from the 80s? The days of bad hair, caked on make-up and mostly pretty crappy pop music?

Personally I don’t drink either, favoured a gravity defying punk look and an eclectic mix of music that was ANYTHING but pop!

But as for the battle of the brands, my recent computer experienced has brought back a flood of memories! 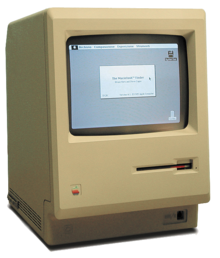 Ah… those were the days! (Photo: Wikipedia)

Immediate disclosure – I was an ardent early adopter of Apple. My very first computer bought with my own money was an Mac in 1987. It was my fist major purchase and saw me through most of my early University days. Anyone else remember WriteNow?

For my later academic years and thesis, I ‘graduated’ to an LC which faithfully served me exceedingly well. In fact for more than a decade I’m sure both computers were tucked away in my sister’s basement!

When I came to India in 1995 as a student for a year+, I lived with a friend’s family as a paying guest. The nephew worked for a company “Anything Mac and some things IBM” – clearly a kindred spirit! My first Sunday in Delhi he took me to his office so I could send an email to my father from a familiar Mac…

Fast forward to moving back to India in 2003, by then a Titanium Mac PowerBook came into the picture, a couple of iPods also joined and then with the move from Delhi to Mumbai, a gorgeous iMac with a display screen bigger than our TV.

However corporate India was firmly PC. From 2004, I learned to live with a succession of IBM then Lenovo laptops generously provided by my employers. Outlook became my contact database and I used it to the hilt adding photos, emails, notes long before contacts could synch with social media tools. By then I was also a power Blackberry user.. clearly the dark side was winning!

My first flirtation with independent work came with a computer conundrum – Mac or PC? I was terribly tempted to buy a MacBook Air… but in the end compromised for an incredibly crappy laptop that needed to be replaced almost immediately by another less than ideal machine. I hadn’t quite reconciled myself to this ‘independent’ thing… and hesitated to invest so much when the future was rather unclear.

Ironically, this was also the time when my nearly 15 year marriage came to an end with my ex taking ‘custody’ of the beloved Macs (by mutual agreement).

Thankfully a ‘proper’ job offer came to the rescue and I settled back into the comfort zone of being supplied an office laptop with the full tech support so essential for the world of PCs. 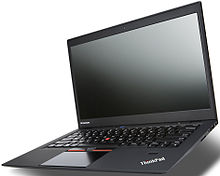 This is snazzier than my old ThinkPad but you get the picture… (Photo: Wikipedia)

That ThinkPad and I crisscrossed Asia for a couple of years and the India tech team declared me their ‘No 1 client’! No one from India used their laptop like I did – hosting webinars, logging in from all over Asia and North America, consistently being one of the ‘1st’ to test out new services…

Zhongguo Jumble and I have both left that organisation but longingly recall the consistent high calibre of those techie folks regardless of country.

Spoilt by their fabulous service, when I next flirted with independent consulting projects, I valiantly battled to survive on my own in the world of PCs.