Twas the night before my Tokyo flight… and all was decidedly NOT calm in our house… Cue partner muttering expletives, with the occasional shout of exasperation.

He had a film shoot in London…

Great, right? You bet! Independent production with a cross-continent story of an estranged father-son relationship… with every element to potentially do well in the film fest circuit.

Sounds fab! Until…. time to apply for a UK work visa…

No it isn’t that he has an Indian passport, he has visas all over the place – including work visas – that’s just the life of an international actor. And it is pretty clear if the guy gave up his Canadian PR, he’s quite content keeping India his base, thank you very much!

The challenge is the pain of having to fill out the UK visa application on-line and itemize 10 year’s worth of travel.  Yes that is TEN WHOLE YEARS of crisscrossing the globe! That’s two passports chock full of entry and exit dates from multiple trips to North America, Europe, Asia and Africa…

Several curses later, the file was successfully uploaded and a couple of days after that he was off to London!

Her much earlier billboard

Most countries are kind enough to let me just waltz in or get a visa on arrival.  So though I may qualify for Indian citizenship, I’d be silly trying to do the work I do with anything other than my lovely Canadian passport.

China is one exception. I’ve been granted enough China visas to know everything needs to be in PERFECT order.

I dreaded having to list travel for the past two years til I saw the new form – reduced to countries visited in the last couple months – Oh bliss! Oh joy!!

Yet still… just days before my partner’s hair tearing travel preparation angst, I was the one vexed about a visa!

What was my problem? Alas the invitation letter from my client’s Shanghai office listed the wrong consulate – argh!

So there were some nail-biting moments watching how painfully slowly the courier with the revised original letter took to make its way to Mumbai.

I was in luck, it reached just in time to process the China visa before my trip to Japan & China! And, wonder of all wonders, a double entry visa – yipee!! 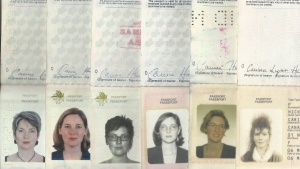 Parade of past passports!

Traversing the globe is a delightful privilege. I’m very grateful so many countries are kind enough to open their borders to those of us with an incurable curiosity and zest to discover lands beyond those of our birth.

I’ve been lucky to have 20 years of international travel… recently I dug up my old passports and my partner decided to have a bit of fun lining them up for a photo parade.

For me, perusing the pages was a lovely reminder of past adventures and knowledge of more to come!

Any vexing visa stories? Nervous or frustrating moments as you waited with bated breath to see if your travel dreams will be fulfilled or dashed?