‘Eve Teasing’ – The other side of my love affair with India

Let me start by sharing that I have yet to meet one single woman anywhere in the world who has NOT experienced sexual harassment in some form or the other.

I challenge you to have a serious conversation about it with any woman and ask if she has escaped – impossible. It simply is a question of the various circumstances, frequency or severity… not whether it has occurred.

A letter on CNN by an American student on her experience of harassment traveling in India sparked considerable debate recently:

It prompted me to reflect on some of my experiences as I too began my ‘love affair’ with India on a ‘study abroad’ program. I’ve also seen how complicated these programs are to organize from dear friend who used to lead such tours to India until they became just too challenging. 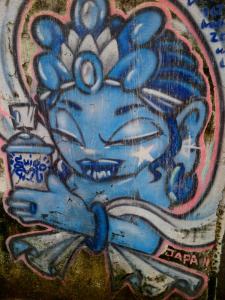 You can’t silence us! (Photo taken in Bandra, Bombay)

Yo gurlz – listen up! (Photo taken in Bandra, Bombay)

Yet today in I see signs of the earlier blithe assumption of safely moving around as a woman in Mumbai in jeopardy. In dismay I watch my beloved ‘Bombay’ report repeated public cases of brutal rape and witness the environment shifting. Each day the newspaper brings further updates on the latest example of a woman or child being molested.

My love affair remains strong and true – I remain fortunate to construct a life where such challenges are minimal. However I’m equally aware this is something which can never be taken for granted. Eve teasing in India is not to be taken lightly. However India is by no means unique and no one is exempt either from the experience or responsibility for sexual harassment.

By Carissa Hickling in Every day, India, Travel on September 18, 2013.
← Shine On Award! Cracking open the cabinet →