Quickly before yet another version of India’s Daughter was blocked, I watched the documentary lest I be tempted to comment on something without actually seeing it.

I needn’t have panicked I’d miss the opportunity… like rabbits, as soon as one is blocked, another link pops out of another YouTube hole.

Social media and mass media alike are abuzz with reactions to the decision to not permit showing the BBC “India’s Daughter” documentary in India. And catapulted its viewing via YouTube in a way a mere airing on BBC TV alone could never have accomplished.

This comes shortly after banning beef consumption in Maharashtra. Yup…  eat beef and you can land in jail for 5 years.

Why is that relevant to India’s Daughter?

Well, if you brutally gang-rape and murder a woman when almost 18 years, that’s a 3 year sentence. Akshay Thakur will be out in December this year… hmm… hard not to feel like we’ve slipped into a weird alternate universe.

A beef burger vs a rape so brutal, her intestines were pulled out of her and she succumbed to her injuries in days, so heinous that citizens rallied to the streets all over India in 2012 and the world paid attention for a few seconds.

So intense was the attention that the rapists were found and the case made it through the initial stages in a ‘remarkably’ short time… (though now, for one year, no progress in the Supreme Court).

Why is that remarkable?

Let’s be honest, in most rape cases, no complaint is made. And if complaints are made, not all are recorded by the police. And even if ‘properly’ filed, rapists are often not arrested. Those rare cases that actually make it to the court, remain waiting for justice a decade or more later, crippled under the weight of a crumbling legal system… Many do not make it to the final stage of a judgement. And the conviction rate? A mere 22 – 27%.

That’s the reality of rape in India. And yet, even the government admits that every 20 minutes, a woman  is raped.

How banning the documentary will improve the situation is mystifying.

For those not familiar with the ‘Nirbhaya‘ (Jyoti Singh) case, she was a remarkable young woman from a modest background who dreamed of becoming a doctor.

After completing her exams, she had a rare evening ‘off’ before her internship was to start. She went to see “Life of Pi” with a friend… They made the mistake of catching an off-duty bus back.

The five men and one ‘juvenile’ in the bus beat her friend and savagely raped her for hours before they were dumped by the side of the road. When they were found, a crowd of 30 – 35 people gathered and initially when one man went to their aid, no one else would help.

What followed were mass protests – an outpouring of bottled rage against not just the ‘Nirbhaya’ case but many others where there seems no justice for girls and women victims of sexual violence.  In a tremendous show of courage and empowerment, the public rallied behind outrage over the tragedy. 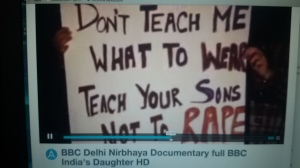 One of the many placards used during the protests

As Leslee Udwin, the documentary film maker, said in an interview with NDTV, the film came out of a love of India, prompted by respect and admiration for the protests

“I felt as a woman sitting on the other side of the world… that here was India leading the world by example… In my life I have never seen a country so impressively standing up for gender equality.”

Part of what makes the documentary so controversial is that it interviews the gang-rapists, specifically the driver (Mukesh Singh), and looks at the context which enabled such brutality to occur.

In the documentary, Mukesh says:

“A decent girl won’t roam around at night. A girl is more responsible for rape than a boy… Boy and girl are not equal.”

“When being raped, she shouldn’t fight back. She should just be silent and allow the rape. Then they’d have dropped her off after ‘doing her’, and only hit the boy.”

“The death penalty will make things even more dangerous for girls. Now when they rape, they won’t leave the girl like we did. They will kill her. Before, they would rape and say, ‘Leave her, she won’t tell anyone.’ Now when they rape, especially the criminal types, they will just kill the girl. Death.”

Mukesh Singh on the rape

What is equally disturbing are the statements of the defence lawyers. AP Singh defends his earlier statement to the media that:

“If my daughter or sister engaged in pre-marital activities and disgraced herself and allowed herself to lose face and character by doing such things, I would most certainly take this sort of sister or daughter to my farmhouse, and in front of my entire family, I would put petrol on her and set her alight.”

Over and over in the documentary and in the media, despite the tragedy, there is a quiet strength from the words of Jyothi’s parents – Asha and Badri Singh.

With tremendous dignity, Jyoti’s mother argues against those who blame the victim

Wisely, Leslee exited India after an NDTV interview where she made a heartfelt plea to the PM to permit showing the documentary lest the ban backfire against India instead of a tool for positive change.

Speaking as someone who is fortunate to call India my adopted home, I’m not blind to its challenges. Sexual harassment, rape, violence against women happen all over the world. India is not unique.

However the prevalence of attitudes which condone such occurrences stem from attitudes embedded in a deeply patriarchal environment that must be experienced to be believed.

A society that has many inspiring stories of highly accomplished and empowered women, equally has unspoken tragedies and lives lost before they even begin.

As one of Jyoti’s friend says in the documentary:

“The only way you can change things is education.”

And yet the lawyers spouting rubbish were ‘educated’.

It is the kind of educatation needed… recently in the Lok Sabha on the debate which erupted with the decision to ban “India’s Daughter”, MP Kirron Kher argued:

“What’s the point of schemes like ‘Beti Bachao‘ if mindsets don’t change?”

I’ve been reading the Saath Saath material created by Avehi Abacus in recognition after the ‘Nirbhaya’ case that change requires education and a different kind of dialogue with youth.

It takes practical steps to bring light and discussion to the nuances of gender bias. It is equally for boys as girls. In a highly sensitive way, it helps equip teachers to have meaningful conversation about gender, the context of bias, sexuality, peer pressures, media, pay inequality, sexual violence and becoming an empowered person.

Is there hope the next generation will find blaming a woman for rape repugnant?

And not just one day in a year… Happy International Women’s Day!