I’m a minority. A minority who generally considers herself very fortunate to be blessed with the opportunity to call India my adopted home.

However some elements in the Hindu majority have a ‘majority minority complex’ and recent expressions are quite disturbing.

Fearing losing its place as the majority, certain ‘Hindu’ leaders in positions of political power and influence, are flexing their might with  tactics such as:

Now… good governance is sorely lacking in this country….

However it certainly will not be achieved by keeping schools open on Christmas, imposing quiz competitions, declamation contests and screening documentaries on “the best practices of good governance.”

With immediate sensational responses such as “BJP cancels Christmas!”, there was much back-peddling and clarifications that are incredible in their lack of credibility. 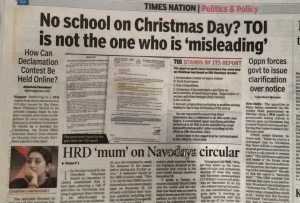 Don’t even get me started! Irrespective of what happened generations ago, how exactly did folks ‘leave home’ if they converted to a different faith? Are non-Hindu citizens of India not ‘home’ already?

And the contradictory debates on legislating a ban on ‘conversion’? The logic defying argument that if it is ‘homecoming’ i.e. a ‘return’ to Hinduism it isn’t conversion?! But others conversions away from Hinduism should be illegal?!

Even if some sense has prevailed with the police not giving permission to hold a mass ‘homecoming’ ceremony provocatively on Christmas, what is going on with all of this? When did the majority become so insecure that elements feel compelled to ‘fight’ against its minorities? 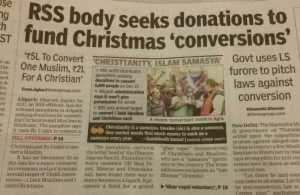 As someone with a degree in history, it is hard to ignore how politics twists and ignores historical evidence. Let’s just say that the history books are indeed re-written by the ‘victor’ or prevailing sentiment, however misinformed.

Historically, India has always had a remarkably syncretic religious heritage, blending cultures, beliefs in a myriad of ways that evolve and change in response to various influences and developments.

I was first drawn to India by an interest to explore this further and even wrote my thesis on a topic that delved into the debates around the colonial legal construct impacting definitions of cultural and religious traditions in its treatment of women in one community.

So it is troubling indeed to see this amazingly diverse country take steps away from celebrating such plurality and steps towards deliberately provoking communal responses – such as an attempt to quash a Christmas holiday or ‘reconvert’ non-Hindus to Hinduism. 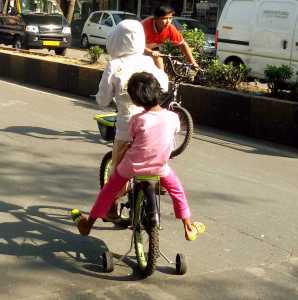 The point that literally lept out at me from a recent Scroll.in article is one of several potential factors for a slightly lower birth rate amongst Hindus vs Muslims – the practice of female infanticide (Despite claims of conversions, data show that Hindus face no danger of losing overwhelming majority)

So, before trying to convert minorities to the majority faith, how about focusing efforts on saving the children that are killed before being born or neglected to the point of death in their early years?

Now I’m not about to make the mistake of blaming ‘Hindus’ for this state of affairs… Just as one tragically troubled man wrecking havoc on Ottawa’s Capital Hill (or more recently in Sydney), does not represent an entire community, so too these strident saffron coloured announcements do not represent ‘all’ Hindus. How can they when Hinduism is by its very essence a delight of diversity with a remarkable range of gods, goddesses and different paths to follow?!

However when an element within the ‘majority’ acts as though threatened by its ‘minority’, dangerous things happen. Look no further than Hitler’s Germany and the Holocaust.

So my ‘Christmas wish’ this year is the hope that these elements in the ‘majority’ will see past their ‘majority minority complex’ to embrace and support ALL peoples of India for a better future together. Let’s avoid devolving into communalism of any kind.