Street art of various forms have a habit of popping up all over Mumbai. And others appear then disappear… either with the ravages of weather of simply the ever evolving pulse of the city.

I shouldn’t be surprised… but must admit, I was by this random water buffalo that just showed up on the narrow path between a park and the small homes of the original village just outside our door.

I’m sure there is a story behind this fellow… but none of his neighbours seemed to know.

It is just one of those things…

Big B in Bandra

India’s greatest superstar of all time remains the “Big B.”

For those who never heard of Bollywood (is that possible?), Amitabh Bachchan, is the ‘angry young man’ who took Hindi films by storm in the 1970s and 80s. Who made “Kaun Banega Crorepati” (Who Wants to Be a Millionaire?) the ONLY show you heard blaring from every single home, with streets deserted so all and sundry could be glued to the TV set. Who remains film royalty even in his 70s. 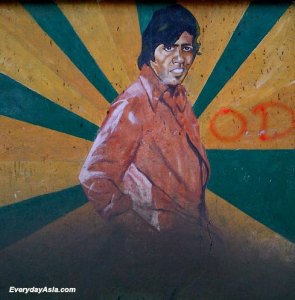 Part of the Bollywood Art Project, this image can be found strolling along the bi-lanes of Bandra.

Once upon a time there was a humble store on Hill Road in Bandra, Mumbai, India.

Then along came an artist who transformed it into a great big happy blue elephant! Festooned with red, this pachyderm attracts smiles from passerbys.

A young friend recounted the tale how excited she was to check out this amazing quaint little place.

And what exactly is it? A cheerful cafe? A cute curio shop? An artful daycare?

They say not to judge a book by its cover but… in this case one can be forgiven for not instantly connecting elephants with eggs!

Blowing bubbles over bikes in Bandra

Up next in our random posts about Bandra street art is this hallucinogenic pink wonder blowing bubbles over a couple of scooters.

This one is literally steps away from our flat smack dab in the middle of an old village that once upon a time sat on the edge of the water before Bandra Reclamation sprung up to weave together Bombay’s islands and support its greedily growing population. END_OF_DOCUMENT_TOKEN_TO_BE_REPLACED

One such initiative occurred late 2014 with the St.art Mumbai project that brought artists from around the world to India. END_OF_DOCUMENT_TOKEN_TO_BE_REPLACED

Ambling along art in Jakarta

Part of my recent Jakarta staycation was a little ambling about… Which lead to my reaching the Ciputra Artrepreneur.

Now… honestly, tell me what you think about the following… END_OF_DOCUMENT_TOKEN_TO_BE_REPLACED