Home » Travel » Canada » Re-unions and giving someone a chance…

Re-unions and giving someone a chance…

Living literally on the other side of the globe from where I grew up tends to disconnect one from those awkward high school re-unions where folks exclaim how well they are holding up after 30 years then secretly sigh about the extra weight, wrinkles but do thank gawd the pimply days are long gone!

So while I haven’t made it to even one high school re-union I did manage to get to an ex-company gathering.

Yup – we’re suckers for punishment. Not only did we work long hours together faithfully for years, we CHOOSE to hang out one evening a year.

It seems to be a bit of a tradition in India to get together with certain groups from a certain time in a company history. In our case, it was during what was the ‘start-up’ phase under the guidance of a particular CEO.

It is always good fun and, predictably, I’m the only ‘firangi‘ who has stuck around long enough to be invited back again and again. 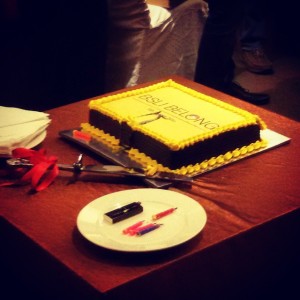 And as I looked around the room, I knew I owe a tremendous debt to a couple folks took a gamble more than a decade ago to hire this crazy Canadian chick who had some mad notion she could build a life and career based in India. I came armed with a few introductions but no job. The most crucial intros were through my former employer in Canada which had three joint ventures in India.

As I greeted our ex-CEO, I recalled our first meeting in his club in South Mumbai. It was my 3rd and last introduction to the joint ventures…

By that point, I felt a bit like Goldilocks and the three bears….

TOO COLD: Then as the Canadian distribution company I worked with largely focused on mutual funds, the next round of meetings focused on the mutual fund company. Again… sooooooo not gonna be my new work home.

JUUUUUUST RIGHT: The last effort turned to the insurance arm. The area where I had the least knowledge and experience. I’d learned from the previous meetings, there was a universal expectation of a linear career path and ‘relevant’ education. Which is certainly not the case with me!

Tell me about your career?

Um… other than my years with the Winnipeg-based financial services company, I’ve focused on academics and along with it taught drama, worked in Universities, libraries and restaurants, ran an international conference, even set-up a late-night vegetarian cafe… (not exactly the typical stuff of banks, mutual fund and insurance companies?!)

Um… actually I have a degree in South Asian history… my thesis is entitled “Disinheriting Daughters: Applying Hindu Laws of Inheritance to the Khoja Ismaili Community of Western India from 1827 – 1937.” (Silence… )

Miraculously, the CEO was kind enough to not immediately shut the door in my face and instead introduced me to the COO. Which lead to another meeting and then a telephone interview with the man eccentric and courageous enough to take the final gamble.

At our re-union, he reminded me humorously of our fateful telephone interview… Let’s just say he initially wasn’t really convinced. But one after the other, he came up with quite reasonable objections which I somehow satisfactorily countered. Keeping his trump card until the end…

You must understand, this is India so it may be challenging as you can only speak English….

I switched to Hindi, blathering on, little knowing at that time that HIS Hindi is… well… let’s just say not exactly his 1st or even 2nd language!

With all ‘excuses’ exhausted, the job was mine and the rest is history. So thank you Gary, Nani, Pete and most of all Nanda!

When did you last time you took a chance on someone? Or was the beneficiary of a ‘break’?

Leave a Reply to Every Day Adventures in Asia Cancel reply