Part of a tasting notes series from a monthly private whisky club in Mumbai, India. This month was my turn to host and it was such a delight having folks home. 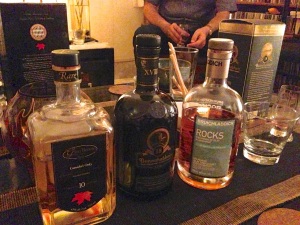 Glen Breton 10 year – Very light in colour, quick thin legs, sweet and light nose yet nothing terribly remarkable. Initially sweet on the palate, then spice, finishing with a faint bitter twist of kerela. Adding water just lost the sweetness with nothing further gained. There was debate about the maturation barrel given the colour. There was also speculation that it must be a very ‘young’ whisky or a possibly a blend, likely not from Scotland. When revealed as a 10 year from Canada – there was universal surprise. This offering is apparently Canada’s ‘only’ single malt distillery in Cape Breton, Nova Scotia which got into trouble years ago with the Scottish Whisky Association for daring to use ‘Glen’ in its name.

Bruichladdich Rocks – What a contrast after the weak Canadian offering! Burnished gold colour, bold nose with rubber and a hint of flowery sweetness. Not a hint of peat… just delightful rich chewy yumminess. Even better, the finish didn’t dash off instantly leaving a gentle warmth. We understand that the name comes from the ancient rocks through which the water apparently crashes. Certainly worth sampling and nice to try a ‘cultish’ distillery’s less accessible offering.

Bunnahabhain 18 year – Gorgeous! A deep rich colour. Nuanced nose with hints of plum and honey. We were so engrossed in our conversation that we inadvertently gave the Bunnahabhain extra air to be delighted when this enabled it to open up even further to reveal apricot and an oaky woodiness. Utterly smooth, creamy without a whiff of peat. We savoured its warm richness, appreciating its different layers of flavour and a hint of spice. A lingering finish that brought back plum and rather happy smiles. This un-chill filtered non-peated Islay offering was the evening favourite!

Remarkably, we featured TWO non-peated islays in one evening purely by chance! Both very much enjoyed followed by dinner.

For a little ‘extra’ we introduced a desert twist. Another experiment from the recent Canada trip – White Owl Spiced is a clear aged rye whiskey with added spice. A rather interesting close with a nice subtle warmth of vanilla cream. Apparently its even better with ice or mixed with ginger ale – something to be tried another time.

PS For those that stuck around for the ‘after’ party… we sampled Tomintoul 10 year – a lightly smoky offering from Speyside, It is a nice easy drink picked up by my cohort from the UK on the Jakarta project.

For more posts on our tasting sessions and whisky explorations… check out my other blog Whisky Lady.

By Carissa Hickling in Whiskey, Whisky Reviews on September 5, 2013.
← Daily Prompt: Name that… You! “Can you drop the Indian accent?” – Accents and voice overs →