On average we see a play once a week or so. The typical venues in Mumbai are NCPA, Prithvi Theatre, sometime one of the college theatres like Sophia or St Andrews.

However there are alternate venues too. We’ve seen theatre performed in someone’s living room or in the middle of a field at The Company Theatre in Kamshet.

Last weekend, we were introduced to another venue – Sitara Studio in Dadar West – compliments of Eric Kaiser’s play “Charge“. The venue has this industrial warehouse feel perfect for a post apocalyptic play about a bed-ridden couple Martha and George who are obsessed with betting or chasing the illusion of reality with their whims and bodily needs catered to by their androids Gigi and Pierre. END_OF_DOCUMENT_TOKEN_TO_BE_REPLACED

Prithvi is a theatrical oasis in the midst of the mad hustle and bustle, chaos and cacophony that makes up every day life in Mumbai. 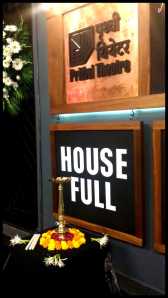 For those not familiar, for over 35 years it has been home to the performing arts of Bombay. The theatre is intimate with the audience surrounding three sides of the stage and a seating capacity of only 300.

Inside the complex is a delightful outdoor cafe where cutting chai is sipped alongside cappuccinos, where folks hang out before or after a performance chatting, reading, relaxing and soaking in the ambiance. Wander further and browse around the small bookstore bursting with books on theatre and related topics. END_OF_DOCUMENT_TOKEN_TO_BE_REPLACED

One of the benefits of living with a stage actor is I get to see a LOT of theatre… sometimes in our living room!

In the last month since I returned from Indonesia, we’ve enjoyed two theatre festivals, I nearly missed one play from Canada but managed to join a ‘pop up venue’ version and my partner is curating a third theatre festival – part of a larger set of festivities that make up ‘Celebrate Bandra’.

And as my partner’s rehearses for his play ‘JAZZ‘, I couldn’t help but think, how lucky is it to enjoy LIVE theatre? END_OF_DOCUMENT_TOKEN_TO_BE_REPLACED

What do you get when you put together four amazing women – each unique, strong, vibrant performers – individually “divas” in their own right? INDIVA!

Described as four divas on a musical journey that blends Hindustani, Jazz, Classical and World Music, their harmonies and way of re-inventing familiar tunes and creating new that is uniquely theirs. We had the distinct pleasure of seeing them perform an amazing acoustic set this morning at Prithvi Theatre in Juhu, Mumbai and I’m so delighted to see such talent come together. 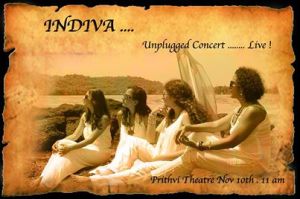 The divas have identified themselves with four elements: END_OF_DOCUMENT_TOKEN_TO_BE_REPLACED