When you think ‘paparazzi‘, you think of mad shutter bugs hounding celebrities going about their everyday activities…

However Mumbai’s breed are rather more civilised. “Please sir… just one more sir! Thank you sir!”

Before I met my partner, I was completely oblivious of Mumbai’s paparazzi.

With him, I discovered there is often a warm symbiotic relationship between photographer and photographee. What isn’t captured on camera are the greetings by name, teasing exchanges and general camaraderie.

These are not the rude intrusive scary paparazzi that scale walls to capture skinny-dipping stars. Nay these are professionals doing their jobs according to a strict unspoken protocol.

Fahad Samar’s latest book Flash Point celebrates the celeb-photographer relationship by taking the perspective of a new aspirant to the business with dreams of making his mark. 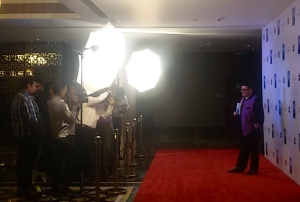 With poise, warmth and grace, Fahad’s spouse Simone Singh opened the event and invited Kabir Bedi to speak on the book.

Now, Kabir is no stranger to being caught on camera with an acting career spanning three continents and 50 years. A veteran of paparazzi attention from around the globe, who better to regale us with insights into the celeb-photographer dynamic and entertain with an excerpt from Flash Point?

Fahad then shifted gear with a short film featuring some of Mumbai’s better-known celebrity photographers… who were then invited to the stage. 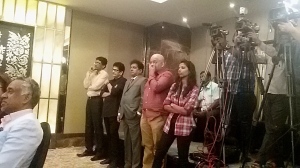 Celeb photographers watching a film about them

Then, by design, Kabir requested everyone hold up their phone camera and snap away at the honoured photographers at the front… The crowd literally rose to the occasion shouting out ‘Here! Here!’ ‘Please look over here!’ ‘One more!’

Then we were requested to turn around and go equally nuts photographing those capturing the event behind us.

Naturally I turned the tables further and caught a queen of the social scene – Shobhaa De – clicking her pic of the event chroniclers. 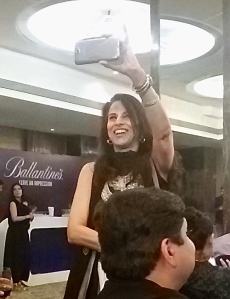 I just started to read the book however it is already a witty and sardonic romp through the not-so-hallowed halls behind the celebrity phenomenon!

The six specimens typically encountered at society events are especially sharp and hilarious descriptions. And HarperCollins created an amusing series of cartoons depicting each…

I can’t help but wonder if the pre-event random elevator slap – which lead to a fruitless pursuit of the unknown assailant around the hotel – could have been a mistaken-identity CSI Mumbai moment? (CSI = Cheating Spouses Inc). Don’t know what these are? Read the book! 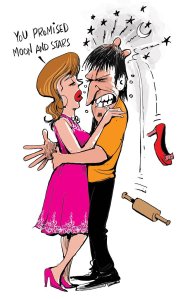 While there may be unwritten rules respected by the Indian paparazzi, it is a pity joe-blow public, armed with cell phones, do not always demonstrate the same courtesy.

Even in obscure locations, some particularly pushy people intrude on private moments to get a selfie snap with a celeb for their social media feed… with zero scope for a gentle decline. In pursuit of 2nd hand fame, these fans hound insistently, relentlessly and sometimes even nastily – confident in their belief it is their RIGHT to click who they want where ever they want.

Perhaps some members of the public should take lessons in decorum from India’s paparazzi?

And salute Fahad for his turning the tables with his ‘salaam’ of the people behind the camera. 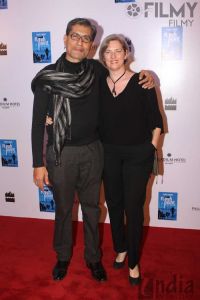 Partner and I at Flash Point Launch