Who keeps the house clean?

A friend sent a link to a new online publication he started called “Scroll.in – News that matters”.  I love lots about it and while the current focus is on the Indian elections, an earlier article on domestic matters caught my eye:

Growing up, we were used to our parents both doing housework and putting us to work too! For a time, Saturday’s were even ‘Dad days’ when he taught us how to make bread, chilli and oat cakes or blow up home-made volcanos while my mother went to the University to study.

My sister is a veterinarian and her partner a drummer. When they had their 1st child, she stayed home for a couple of months and her partner the balance. At the one year mark when paternity benefits stopped, her partner remained home as the ‘primary’ parent. Having the father stay home and the mother work seemed perfectly normal.

But it is not…. It remains an anomaly globally.

OECD recently did a study examining how many minutes per day on average men spend on unpaid domestic work. 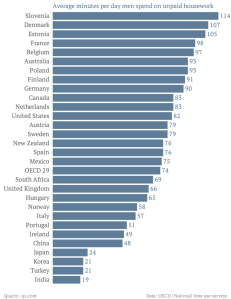 According to the report, men in Slovenia are stars and do the most with 118 minutes of household work per day in the world! Cheers! Danish guys aren’t far behind at 107 minutes.

Slipping further down the ranks, Canadian gents fair marginally better than American at 83 instead of 82 minutes, however certainly well above their erstwhile colonial parent – British men who clock only 66 minutes.

Men in China are under an hour a day at 48 mins, from Japan even less at half that!

But here is the kicker – of the 30 countries considered, guess where India landed?

So what does this mean for a woman and man who grow up with very different expectations around household work? Talk about a cultural battleground behind closed doors!

The first time in Delhi I saw a man order his mother / wife / sister to get water / beer / chai, I was aghast! This issue of who does the work at home is easily one of the most telling and personal of issues.

What is an unspoken element in this equation is that in places like India, behind most successful men AND women are very efficient PAID domestic support!

And while I am blessed with a partner who is incredibly considerate and currently spoiling me rotten while I’m down with a busted ankle, he can barely function in the kitchen. Who stepped in? Our delightful maid added cooking to her other duties. Naturally for us it is boon in our time of need and for her, we’ve increased her salary.

So ladies and gents… when looking for love, consider the not so small matter of mutual expectations on who keeps the house clean! 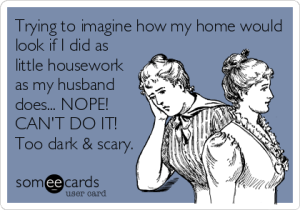 By Carissa Hickling in Canada, Discovering difference, India, Work on April 8, 2014.
← “The dog ate my homework” Behind the billboard… Daddy Cool →