Bonus time in Bombay – Jakarta I’ll be back again soon!

Today I was supposed to be in transit to Jakarta… but I’m instead waking up in Bombay. What happened? Did I miss my flight? Was there some major life tragedy that derailed everything? Nope! Just a simple delay in the launch date for the project which means more time home rather than away.

Where I was supposed to be today…

When I said “Happy to work on a project in Jakarta!” the understanding was it would finish in November. Then we started actually working in Indonesia and it was blindingly obvious it wouldn’t finish until December. And now with the dynamics of one partner, it has been pushed back to February.

Still the same work, still the same fixed fee, just stretched over a longer time with larger ‘breaks’ in between. It is a much more realistic schedule and most importantly enables us the time to get recruitment on track so we can work along with the new people who will be taking the project forward once we are gone.

That’s kinda the role of consultants in this sort of implementation project. We aren’t the parents that got ‘knocked up’ with a baby nor are we the ones that will raise the kid right, but we are the mid-wives helping coach through that painful birth. And it sure will be nice to have more ‘family’ around during the delivery and not just a single mom – which has been the case so far.

So while it is a bit inconvenient, it is the right decision for the client and I could probably do with a bit more ‘gestation’ period for figuring out my own ‘what next’… 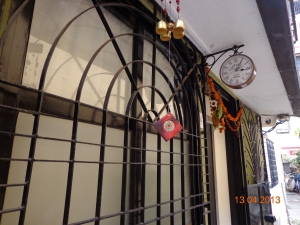 What am I going to do? Enjoy my bonus time in Bombay! Get caught up on all sorts of every day activities and tap into more resources here in India for the benefit of the client in Indonesia. Maybe even get around to some blog posts I’ve wanted to do for some time but never get around to writing/finishing!

What else am I going to do? Actually plan the next trips to Jakarta to build in some exploration time – beyond the scheduled work time for the client. It would be such a shame if nearly every hour there is spent slogging on work. Yes work will remain the primary focus but now that our time is being ‘stretched’, why not ‘stretch’ it in Indonesia too? Naturally on my own ‘dime’ but still – can’t miss such an amazing opportunity! What do you think?

So… here’s to enjoying bonus time in Bombay and Jakarta – watch out! I’ll be back soon enough and ready to make the most of it! 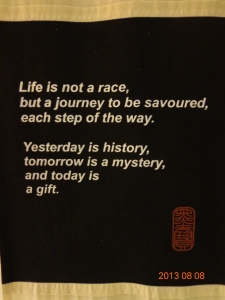 Quote on a wall hanging from my temporary ‘princess pad’

PS Those that were curious about my adventures in apartment hunting… I actually did find a place however by the time that miracle occurred, it was clear the timelines and approach was shifting so could not ‘lock in’ to renting. Anyone with tips for good hotels with deals in the $100/day range in Central or Slipi? Suspect I’ve managed to track down most but one never knows! I could have missed a hidden gem. 🙂

By Carissa Hickling in Activities, Every day, India, Indonesia, Travel on September 23, 2013.
← “How come you don’t have an accent in Hindi?” Improbable Efficiency – The Lunchbox Love Story (take 2!) →