Yes that really is the title… of a documentary film I caught as part of the Singapore International Film Festival last week.

What made it remarkable is that it was shown without any censorship – apparently passing without difficulty. Can I just say – wow! Singapore is definitely changing!

You need to understand, Singapore is not a place known for originality or its acceptance of ‘alternate’ perspectives or lifestyles. DJ Chris Ho (X’Ho or DJ Mentor) is known for being a force for counter-culture and while I see him more of a creative ‘borrower’ than a creator of original content, he certainly courts controversy and shakes things up.

The evening began with an amusing ritual. Little bottles were passed around – “Take one and pass it on.” What was it? Chewing gum. We all collectively indulged in chewing contraband gum just to set the tone for some naughtiness!

The film’s focus is following DJ Chris Ho on his first trip to China where he gets another tattoo and shares his perspectives on his life journey, relationship with Singapore and more.

The blurb about the film shares:

“Known for his acerbic wit and love for body art, Singapore musician, writer, and DJ Chris Ho (also known as X’Ho) is equally notable as an opinionated commentator on Singapore society and culture. His larger than life persona shines through in many artistic pursuits, spanning three decades, producing 25 musical excursions, six short films and three books.

In this raw documentary, director Kan Lume takes his subject on his maiden trip to China, to reflect on his Chinese roots and life so far. Chris gets candid and scathing about his pet peeves, the land he calls home and the way it is run. As the scenery changes however, Chris shows another side of himself, as a precocious and charming old soul whose wild days will forever be etched both inside and out following the journey.”

A European in the audience asked a question what Chris means when he said “Singapore is not a country” (extended from his song No Ordinary Country). Chris’s response was “Singapore is a collection of used parts.” Chris further clarified this comes from a poem, one that he happens to believe, however shared that if you are Singaporean you will understand. But if you are not Singaporean, it isn’t possible to explain. Hmm…

Unlike say France which is a clear nation state based on history, language and culture, Singapore is a collection of nationalities, cultures, language from China, Malaysia, India, Indonesia whose lives became entwined with the port city of Singapore. Which… by a twist of history split from Malaysia in 1965 under the leadership of a charismatic man with a relentless drive to ‘modernise’ and make Singapore a place attractive to invest… a kind of palatable ‘Asia lite’ to be seen as “first-world oasis in a third-world region”.

While its citizens do not necessarily share a common language, cultural tradition or even history beyond the 1960s, many were ‘used’ by previous colonisers as well – be it British, Japanese, etc.

Could this be what he meant by a ‘collection of used parts’? 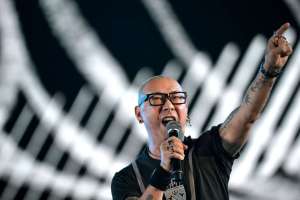 The film closed with a song “Singapura Über Alles” with direct borrowing from the DK. And if you don’t know that stands from the Dead Kennedys you were not an 80s punk rocker. 😉

And why Naked DJ? Not directly answered in the film, it is a ‘naked’ expose of DJ Chris Ho’s perspectives on life and Singapore. It also, at one point, literally shows him naked as he pulls out his flacid “ahem” to show the world his Prince Albert piercing. Shades of provoking, just like including in DK’s Frankenchrist album H.R. Giger’s “Penis Landscape“?

It was refreshing to see a little counter-culture kicking in Singapore. My friend and I had an animated conversation sparked by the film. Through her, over the years, I’ve been fortunate to gain a glimmer of insights into Singapore’s artistic and political scene… I could add to this a layer of cultural references to a punk past…

This film WOULD have been censored in India. And had the equivalent comments about PM Modi been made as Chris did about Minister Mentor  Lee Kuan Yew… let’s just say things would not have been an engaged yet completely polite dialogue.

One thing that made me uncomfortable was the Nazi references. Sorry dude – not cool. Will never be cool. Even if your admiration was ambiguous.

By Carissa Hickling in Film, Play, Singapore, Travel on December 14, 2015.
← Could the tax tide be turning?? “Madam you must put your permanent address!” Aka a logic defying day →