Wednesday’s “house-warming” was combined with the launch of The Bartender’s new video… The entire place was bursting with talent and instruments. Fabulous!

It was a riot seeing the video together with the folks involved in making it – lots of familiar faces! The video was shot walking distance from home… And features some of my favourite Bandra graffiti, brought to life digitally with funky eye googling! It is based on an old hindi film hit “Khaike Paan Banaraswala” re-interpreted “Bartender” style.

We all cracked up at the sadhu and cop parts especially. Vinay a sadhu?? Ramon a cop?? Impossible!! Far too zany to even be the caricature ‘cool dudes’ that burst forth after eating the special paan spiked with a secret transformative formula.

Check out the video: The Bartender – Khaike Paan Banaraswala – Reprise

In honour of India’s Biggest Superstar Amitabh Bachchan turning 70, Kiwi musician Mikey McCleary’s band The Bartender released their album – B Seventy. The band’s musical muses are Anushka Manchanda, Shalmali Kholgade and Mauli Dave. B Seventy, is a re jazzed and revamped version of AB’s top performing hit tracks over the years.  An album specially dedicated to bringing back yesteryear original songs in a jazzy, sexy with a very Moulin Rouge meets Chicago ba-dum dum beat to boot!’

Behind the scenes… at the house we ‘cooled’ a few weeks ago: https://www.youtube.com/watch?v=TrntGNle-Ww

And pics from the live home jam session… 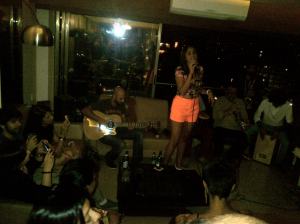 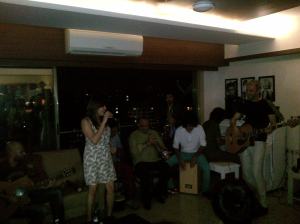 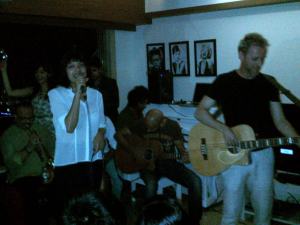 Pssst! For the Amitabh Bacchan fans… The voice at the end of the “Reprise” video is my partner impersonating the “Big B” and here is the original song with Amitabh Bachchan and Zeenat Aman