Home » Discovering difference » Back in Bombay… and straight to Bandra!

Back in Bombay… and straight to Bandra!

Its my first trip home to Mumbai since landing a super cool project in Jakarta. I managed to arrange a flight route (via Bangkok) that permitted me to arrive in time for a friend’s new gallery / event space launch. We reached just as the music began, what joy to be serenaded by a dear friend, munch on macaroon treats, sip wine and generally enjoy terrific company in a convivial atmosphere. Our friend has done well with this new venture!

For those unfamiliar with Bandra, it is a special neighbourhood – a catholic bastion with strong proud traditions that has become rather popular with ex-pats – including those seeking a more ‘regular’ life not bolstered by insane high salaries and expense accounts. You know the type – locally hired foreigners who have chosen to stay and forgo all the ‘extras’ that come with a pampered ex-pat nomadic life!

Particularly the immediate area around Veronica and Chapel road, one can still find old bungalows and a sense of community. The space I found myself just a few hours from landing is one such bungalow… That was falling into complete disrepair until along came friends with a huge labour of love and rather more money than they planned – transforming it into a new avatar – an enchanting space to enjoy for eclectic events and show off funky furniture. 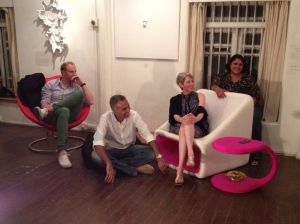 Yes we were a rapt attentive audience!

Why we were rapt! 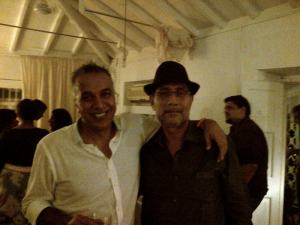 Two of my favourite guys – part 1

Two of my favourite guys – part 2

Lots of updates to share however in the meantime, I’m just going to enjoy being here. Waking up to the sounds of home, the smells of the neighbour making aloo paratha, the simple joy of being brought that first cup of cappuccino by my partner in the morning and yes – even the dratted ‘ding dong’ every few minutes!

It’s good to be home. What do you miss when traveling?