Don’t get me wrong, I do NOT miss -40’c winter, and given a choice between sweating and freezing, I’ll take sweat! However there is a tiny part of me that can’t help but flirt with enjoying a little chill.

Which is why my November 2014 trip to Amsterdam was all the more memorable for its flash of ‘winter’ before being replaced on my return with familiar Bombay sandals and sleeveless tops.

So… indulge me while I rewind the clock a few months and pretend I’m back in wintery Amsterdam. Call it a little psychological escapism from melting in Mumbai… ‘cus just like Winnipeg winters go on for months and months, this is just the beginning of the heat and humidity for me! 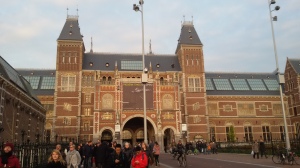 After spending a day wandering around Bibliotheek + Conservatorium, we headed to the Rijksmuseum to meet with other friends.

There we stumbled upon a flurry of activity, green balloons going up in to the sky and a brass band proudly belting out the official opening of the skating pond in Museumplein. 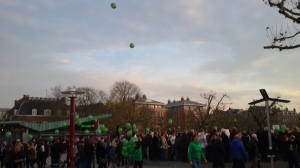 As we passed the delightful restaurant beside the rink, my friend shared how one must have poffertjes (mini pancakes) after skating. 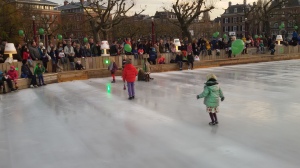 The day earlier, we saw skating rinks opening in Leidseplein, Thorbeckeplein close to Rembrandtplein and Beursplein near Dam Square and Westergasfabriek. All these rinks opening is a sign in Amsterdam that it is OFFICIALLY winter! 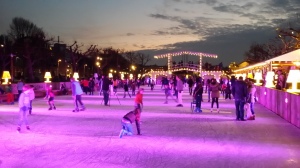 Followed as the evening progressed by more and more..

While I enjoyed watching others twirl, slip and whiz around on the rink, this is not a skill I’ve mastered. While my family back in Winnipeg can curl, skate and ski with aplomb… I’m frankly wretched at winter sports! Clearly from an early age was more inclined to warmer climes.

And yet I do appreciate the magic of the crisp clear winter air, the warmth of a crackling fire. Yup! There it is again… the wisp of a hankering for a little quiet snow and chill.

Stay warm my friends in colder climes! And chill out folks where it is getting hotter day by day!

By Carissa Hickling in Europe, Travel on April 19, 2015.
← Delhi times.. they are a changin! 8th Quarter Summary – Who said turning two is terrible?? →